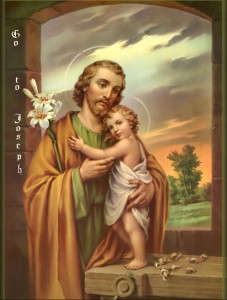 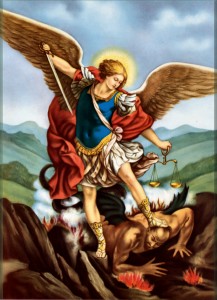 Archangel. Leader of the army of God during the Lucifer uprising. Devotion is common to Muslims, Christians and Jews, and there are writings about him in all three cultures. Considered the guardian angel of Israel, and the guardian and protector of the Church. In the Book of Daniel (12:1), Michael is described as rising up to defend the Church against the Anti-Christ.

Born poor in 1673 at Montfort-La-Cane, Brittany, France. Studied in Paris, France, and ordained in 1700. While a seminarian he delighted in researching the writings of Church Fathers, Doctors and Saints as they related to the Blessed Virgin Mary, to whom he was singularly devoted.

Under Mary‘s inspiration, he founded the Congregation of the Daughters of Divine Wisdom, a religious institute of women devoted to the care of the destitute. During this work, he began his apostolate of preaching the Rosary and authentic Marian devotion. He preached so forcefully and effectively against the errors of Jansenism that he was expelled from several dioceses in France. In Rome Pope Clement XI conferred on him the title and authority of Missionary Apostolic, which enabled him to continue his apostolate after returning to France. He preached Mary everywhere and to everyone. A member of the Third Order of Saint Dominic, Saint Louis was one of the greatest apostles of the Rosary in his day, and by means his miraculously inspiring book, The Secret of the Rosary, he is still so today; the most common manner of reciting the Rosary is the method that originated with Saint Louis’s preaching. In 1715, he founded a missionary band known as the Company of Mary.

His greatest contribution to the Church and world is Total Consecration to the Blessed Virgin. Consecration to Mary is for Saint Louis the perfect manner of renewing one’s baptismal promises. His spirituality has been espoused by millions, especially Pope John Paul II, who has consecrated not only himself but every place he has visited as pope. In True Devotion to Mary, Saint Louis prophesied that the army of souls consecrated to Mary will be Her instrument in defeating the Devil and his Antichrist. As Satan gains power in the world, so much more shall the new Eve triumph over him and crush his head. Died on April 28, 1716 at Saint-Laurent-sur-Sovre, France. 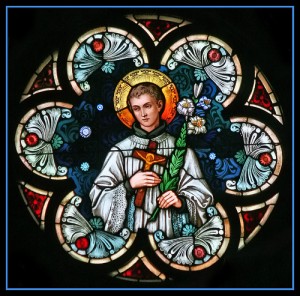 Born in 1568 in the family castle of Castiglione delle Stivieri in Montua, Lombardy, Italy, he was the son of Ferdinand Gonzaga, a prince in the Holy Roman Emperor and a compulsive gambler. Cousin of Saint Rudolph Acquaviva. Trained from age four as a soldier and courtier. Served as a page in the Spanish court. He suffered from kidney disease, which he considered a blessing as it left him bed-ridden with time for prayer. While still a boy himself, he taught catechism to poor boys. He received his First Communion from Saint Charles Borromeo. At age 18, Aloysius signed away his legal claim to his family’s lands and title to his brother, and became a Jesuit novice. Spiritual student of Saint Robert Bellarmine. Tended plague victims in Rome, Italy in the outbreak of 1591 during which he caught the disease that killed him at age 23.

Born in 1515 in Avila, Spain, the daughter of Don Alonso Sanchez de Cepeda and Doña Beatriz. She grew up reading the lives of the saints, and playing “hermit” in the garden. Crippled by disease in her youth, which led to her being well educated at home, she was cured after prayer to Saint Joseph. Her mother died when Teresa was 12, and she prayed to Our Lady to be her replacement. Her father opposed her entry to religious life, so she left home without telling anyone, and entered a Carmelite house at 17. Seeing her conviction to her call, her father and family consented.

Soon after taking her vows, Teresa became gravely ill, and her condition was aggravated by the inadequate medical help she received; she never fully recovered her health. She began receiving visions, and was examined by Dominicans and Jesuits, including Saint Francis Borgia, who pronounced the visions to be holy and true.

She considered her original house too lax in its rule, so she founded a reformed convent of Saint Joseph of Avila. Teresa founded several houses, often against fierce opposition from local authorities. Mystical writer. Died on October 4, 1582 at Alba de Tormes. 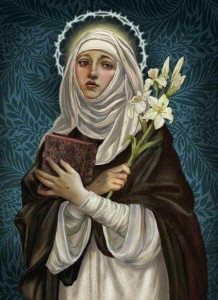 Born in 1347 at Siena, Tuscany, Italy, she was the youngest of 24 children. Her father was a wool-dyer. At the age of seven she had a vision in which Jesus appeared with Peter, Paul, and John; Jesus blessed her, and she consecrated herself to Him. Her parents began making arranged marriages for her when she turned 12, but she refused to co-operate, became a Dominican tertiary at age 15, and spent her time working with the poor and sick, attracting others to work with her. Received a vision in which she was in a mystical marriage with Christ, and the Infant Christ presented her with a wedding ring. Some of her visions drove her to become more involved in public life. Counselor to and correspondent with Pope Gregory XI and Pope Urban VI. Stigmatist in 1375. Lived in Avignon, France in 1376, and then in Rome, Italy from 1378 until her death on April 29, 1380.

St. John of the Cross 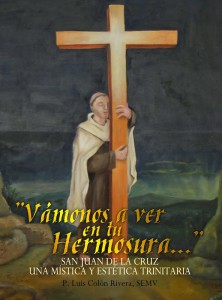 Born into poverty in 1542 at Fontiveros, Spain, as Juan de Santa María de Yepes, he cared for the poor in the hospital in Medina del Campo, Spain. Carmelite in 1563 at age 21, he lived more strictly than the Rule required. He studied at Salamanca, Spain. Ordained a priest in 1567 at age 25. Persuaded by Saint Teresa of Avila to begin the Discalced reform within the Carmelite Order, he took the name John of the Cross. Master of novices. Spiritual director and confessor at Saint Teresa‘s convent. His reforms did not set well with some of his brothers, and he was ordered to return to Medina del Campo. He refused, and was imprisoned at Toledo, Spain, escaping after nine months. Vicar-general of Andalusia, Spain. His reforms revitalized the Order. Great contemplative and spiritual writer. Died on December 14, 1591 at Ubeda, Andalusia, Spain.

St. Thérèse of the Child Jesus 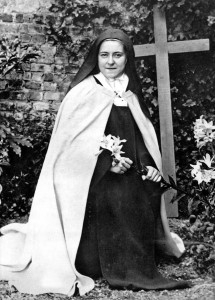 Born on January 2, 1873 at Alcon, Normandy, France as Francoise-Marie Therese Martin to a pious middle-class French family of tradesmen; daughter of Blessed Louis Martin and Blessed Marie-Azelie Guérin Martin, and all four of her sisters became nuns. Her mother died when Francoise-Marie was only four, and the family moved to Lisieux, Normandy, France to be closer to family. Cured from an illness at age eight when a statue of the Blessed Virgin smiled at her. Educated by the Benedictine nuns of Notre-Dame-du-Pre. Confirmed there at age eleven. Tried to join the Carmelites, but was turned down due to her age. Pilgrim to Rome, Italy at for the Jubilee of Pope Leo XIII whom she met and who knew of her desire to become a nun. Joined the Carmelites at Lisieux on 9 April 1888 at age 15, taking her final vows on September 8, 1890 at age 17. Known by all for her complete devotion to spiritual development and to the austerities of the Carmelite rule. Due to health problems resulting from her ongoing fight with tuberculosis, her superiors ordered her not to fast. Novice mistress at age 20. At age 22, she was ordered by her prioress to begin writing her memories and ideas, which material would turn into the book Story of a Soul. Therese defined her path to God and holiness as The Little Way, which consisted of child-like love and trust in God. She had an on-going correspondence with missionaries. She died on September 30, 1897 at Lisieux, France of tuberculosis. 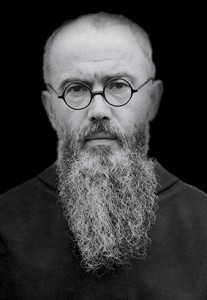 The second of three sons born to a poor but pious Catholic family in Russian-occupied Poland. His parents, both Franciscan lay tertiaries, worked at home as weavers. His father, Julius, later ran a religious book store, then enlisted in the army of Pilsudski, fought for Polish independence from Russia, and was hanged by the Russians as a traitor in 1914. His mother, Marianne Dabrowska, later became a Benedictine nun. His brother Alphonse became a priest.

He entered the Franciscan junior seminary in Lwow in 1907 where he excelled in mathematics and physics. For a while he wanted to abandon the priesthood for the military, but eventually relented to the call to religious life, and on September 4, 1910 he became a novice in the Conventual Franciscan Order at age 16. He took the name Maximilian, made his first vows on September 5, 1911, his final vows on November 1, 1914.

Studied philosophy at the Jesuit Gregorian College in Rome from 1912 to 1915, and theology at the Franciscan Collegio Serafico in Rome from 1915 to 1919. On October 16, 1917, while still in seminary, he and six confreres founded the Militia Immaculatae, devoted to the conversion of sinners, opposition to Freemasonry, spread of the Miraculous Medal, and consecration to the Immaculata. Ordained on April 28, 1918 in Rome at age 24.

Not content with his work in Poland, Maximilian and four brothers left for Japan in 1930. Within a month of their arrival, penniless and knowing no Japanese, Maximilian was printing a Japanese version of the Knight. The magazine, Seibo no Kishi grew to a circulation of 65,000 by 1936. In 1931 he founded a monastery in Nagasaki, Japan comparable to Niepokalanow. It survived the war, including the nuclear bombing, and serves today as a center of Franciscan work in Japan.

In mid-1932 Max left Japan for Malabar, India where he founded a third Niepokalanow house. However, due to a lack of manpower, it did not survive. Poor health forced him to curtail his missionary work and return to Poland in 1936.

Maximilian was imprisoned in Pawiak prison, Warsaw, Poland on February 17, 1941. On May 28, 1941 he was transferred to Auschwitz. In July 1941 there was an escape from the camp. Camp protocol, designed to make the prisoners guard each other, required that ten men be slaughtered in retribution for each escaped prisoner. Francis Gajowniczek, a married man with young children was chosen to die for the escape. Maximilian volunteered to take his place. He died on August 14, 1941 by lethal carbonic acid injection after three weeks of starvation and dehydration.