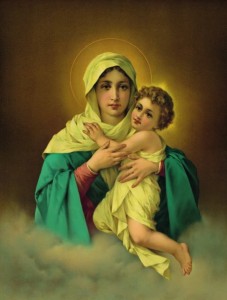 “The spirit of the Fraternity is also essentially Marian, living each day with greater truth and fullness our consecration as Slaves of Love of Mary Immaculate through a Covenant of Love with Her in the degree of the Blank Check (total availability) in the Shrine. Thus, Her slaves are inspired by the sentiments of the virginal heart of Her who called herself a Slave of the Lord, available so that He could write in Her life the mysterious plans of His Eternal Love.” (from our Constitutions) 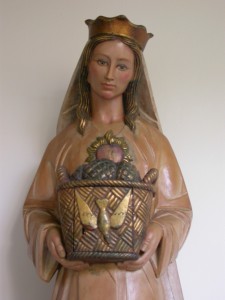 The Marian dimension of our charism is a consequence of Mary’s God-willed role in the plan of salvation, as St. John Paul II teaches:

For if we feel a special need, in this difficult and responsible phase of the history of the Church and of mankind, to turn to Christ, who is Lord of the Church and Lord of man’s history on account of the mystery of the Redemption, we believe that nobody else can bring us as Mary can into the divine and human dimension of this mystery. Nobody has been brought into it by God himself as Mary has. It is in this that the exceptional character of the grace of the divine Motherhood consists. Not only is the dignity of this Motherhood unique and unrepeatable in the history of the human race, but Mary’s participation, due to this Maternity, in God’s plan for man’s salvation through the mystery of the Redemption is also unique in profundity and range of action. (Redemptor Hominis 22)

Fr. Joseph Kentenich, founder of the Schoenstatt Movement, expressed the Blessed Mother’s uniqueness is this way:

The supernatural Personal Character of our dear Lady consists in the fact that she in the unique bridal, permanent helpmate and associate of Christ, who is the Head of the whole Church and world, in the entire work of redemption. (The Marian Priest) 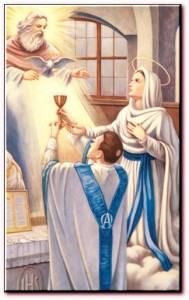 Mary’s special mission makes her a great aide to us in our striving to follow Christ. This is the reason for our consecration to her, classically expressed by St. Louis-Marie Grignion de Montfort:

As all perfection consists in our being conformed, united and consecrated to Jesus it naturally follows that the most perfect of all devotions is that which conforms, unites, and consecrates us most completely to Jesus. Now of all God’s creatures Mary is the most conformed to Jesus. It therefore follows that, of all devotions, devotion to her makes for the most effective consecration and conformity to him. The more one is consecrated to Mary, the more one is consecrated to Jesus. That is why perfect consecration to Jesus is but a perfect and complete consecration of oneself to the Blessed Virgin, which is the devotion I teach; or in other words, it is the perfect renewal of the vows and promises of holy baptism. (True Devotion 120) 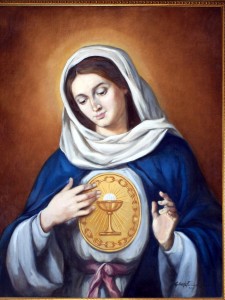 In Schoenstatt, we express this consecration in terms of a Covenant of Love with the Mother Thrice Admirable in her Shrine. Once again, Fr. Kentenich explains:

Through a solemn consecration, that is, through a perfect mutual covenant of love, we want to give ourselves to her [Mary] entirely and unreservedly for time and eternity, so that as a perfect covenant partner we may always stand in her presence and grow in holy two-in-oneness with her, and in her with the Triune God. […]

The covenant of love not only gives us the right, but even makes it our duty to make proper use of our right to make claims of love on our covenant partner, and to use the power of petition which has been given to us. In other words, just as Our Lady makes claims on and expresses wishes to us, we in turn should do the same with her. 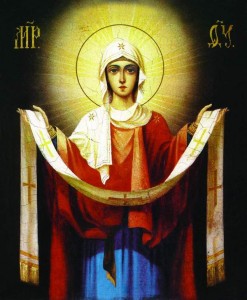 Mary has also been present to her Servants of the Holy Eucharist and of the Blessed Virgin Mary since our foundation. So proclaims our founder, Fr. Anibal:

The Most Holy Virgin (so we feel and see), intervenes in favor of the poorest and of the weakest, of the most miserable, of the beggars of her love, of her slaves and children, and through her initiative, forms this community. […] Our community is a Bethlehem… it is a Bethlehem. Just as in Bethlehem she brought the mysterious light which will never go out for all the history of humanity, so also, she brought us, gave birth to us; we have been born from Her. In the middle of the night, we have been born in Her.

It was St. Louis-Marie de Montfort who expressed the meaning behind the symbol of “slave”:

No other human state involves belonging more completely to another than slavery. Among Christian peoples, nothing makes a person belong more completely to Jesus and his holy Mother than voluntary slavery. Our Lord himself gave us the example of this when out of love for us he “took the form of a slave”. Our Lady gave us the same example when she called herself the handmaid or slave of the Lord. The Apostle considered it an honor to be called “slave of Christ”. Several times in Holy Scripture, Christians are referred to as “slaves of Christ”. The Latin word “servus” at one time signified only a slave because servants as we know them did not exist. Masters were served either by slaves or by freedmen. […] That we must belong to Jesus and serve him not just as hired servants but as willing slaves who, moved by generous love, commit themselves to his service after the manner of slaves for the honour of belonging to him. (True Devotion 72f.)